Home / News / What is astaxanthin good for?

What is astaxanthin good for?

Astaxanthin is a ketone or carotenoid, pink in color, fat-soluble, insoluble in water, soluble in organic solvents. In 1933, a purple-red crystal was extracted from shrimp, crab and other aquatic products, and it was determined to be a carotenoid closely related to astaxanthin, so it was named astaxanthin. It widely exists in organisms such as shrimp, crab, fish, bird, certain algae and fungi. As a non-provitamin A carotenoid, astaxanthin cannot be transformed into vitamin A in animals, but it has the same antioxidant effect as carotenoids, and its ability to quench singlet oxygen and capture free radicals is better than β - Carotene is more than 10 times higher than vitamin E, and it is more than 100 times stronger than vitamin E. People also call it "super vitamin E". Astaxanthin's antioxidant, coloring, and immunity-enhancing properties have been widely recognized. The United States and other countries have allowed it to be used in production as a food additive. As a natural food additive, it has broad development prospects.

Natural astaxanthin is a highly oxidative carotenoid, which has the functions of anti-oxidation, anti-aging, anti-tumor, and prevention of cardiovascular and cerebrovascular diseases. It has been used in health food, high-end cosmetics, pharmaceuticals and other fields internationally middle. Astaxanthin itself is not stable, easy to oxidize, and easy to decompose when exposed to light. Most of the astaxanthin on the market retains its activity in the form of gel. 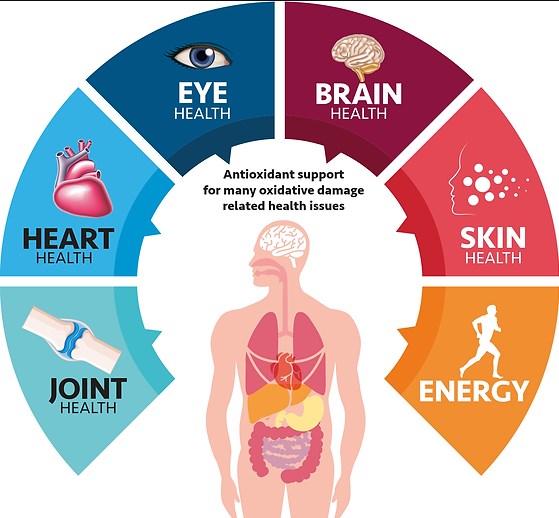 The important property of astaxanthin lies in its antioxidant properties, it is an excellent antioxidant. The strong antioxidant activity of astaxanthin is due to its ability to stabilize the structure of the membrane, reduce membrane permeability, and limit the entry of peroxide promoters into cells. Protects vital molecules in cells from oxidative damage. At the same time, astaxanthin may have the potential to be a pro-oxidant to induce oxidative stress. The conjugated double bond, hydroxyl group and unsaturated ketone group at the end of the conjugated double bond chain in the astaxanthin molecule, in which the hydroxyl group and the ketone group form an α-hydroxy ketone, these structures have relatively active electronic effects and can Donate electrons to free radicals or attract unpaired electrons of free radicals, effectively quenching highly oxidizing singlet reactive oxygen species and other free radicals in the environment. Studies have shown that the ability to quench reactive oxygen species increases with the increase in the number of conjugated double bonds, and astaxanthin has the strongest quenching ability, and its ability to quench molecular oxygen is better than that of β-carotene, Vitamin E, alpha-carotene, lutein and lycopene are all high. Astaxanthin integrated into the membrane system inhibits lipid peroxidation through the protection of liposomes, and can also protect cells and DNA from oxidation damage, protect intracellular proteins, enable cells to effectively metabolize, and make cells The proteins in it function better. This antioxidant effect is manifested in prolonging the time for low-density lipoprotein (LDL) to be oxidized, thereby reducing the occurrence of atherosclerosis.

In addition, experiments have shown that astaxanthin can increase the activity of antioxidant enzymes and protein expression. Different doses of astaxanthin can significantly increase the protein expression of catalase and superoxide dismutase in animal cells, and its biological activity also has a significant increase. Significantly improved, and these substances all play a better antioxidant effect in the body.

In November 2021, the latest research by scientists at the Ural Federal University in Russia found that astaxanthin is helpful in the treatment of diabetes. The research was published in the journal Food Science and Nutrition. Irina Danilova, director of the Department of Biochemistry and Biophysics at Ural Federal University, said that astaxanthin is the strongest natural substance against oxidative stress, and its antioxidant activity is several times that of zeaxanthin, lutein, and keratin. Flavin, β-carotene and lycopene are 100 times stronger than vitamin E, and are mainly found in marine organisms such as salmon and crustaceans.

Astaxanthin can significantly enhance the body's local and systemic immunity. This immunomodulatory property combined with antioxidant properties plays an important role in preventing the occurrence and spread of diseases. Experiments have shown that carotenoids can slow down the decline in immunity caused by aging, improve the function of the body's immune organs, and enhance resistance to harsh environments. More importantly, astaxanthin can enhance the function of T cells in the body, increase the number of neutrophils and natural killer cells, and participate in the body's cellular immunity; astaxanthin can also increase the activity of B cells in the immune system and eliminate foreign invasion pathogens, by assisting in the production of antibodies and enhancing the activity of other immune components, such as promoting the production of immunoglobulins, increasing IgG (immunoglobulin G), IgA (immunoglobulin A) and IgM (immunoglobulin M) The amount of production, enhance the humoral immune response, and improve the immunity of animals. 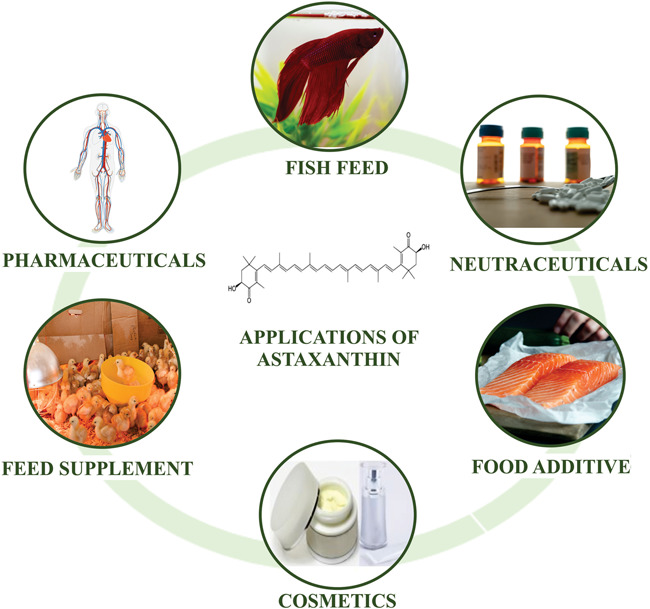 Abroad, astaxanthin has been used as a food additive for food coloring, preservation and nutrition. Astaxanthin is fat-soluble, with bright red color and strong anti-oxidation properties. For food, especially the food with a lot of fat, it has both coloring effect and fresh-keeping effect. In Japan, patents have been applied for the use of astaxanthin-containing red oil for pickling vegetables, seaweed and fruits, and patent reports for coloring beverages, noodles and seasonings. Foreign countries have already carried out research on the use of astaxanthin to synthesize human health products, aiming at strengthening the immune system, anti-cancer, protecting the retina from ultraviolet radiation and photooxidation, anti-inflammation, and preventing oxidative damage of blood low-density lipoprotein (LDL)-cholesterol Efficacy and other aspects, the development of health products containing astaxanthin.

Utilizing the anti-oxidation and immune-stimulating effects of astaxanthin can be used to make drugs to prevent oxidative tissue damage. Studies have shown that astaxanthin can pass through the blood-brain barrier to protect the nervous system, especially the ability of the brain and spine, and can effectively treat ischemic reperfusion injury, spinal cord injury, Parkinson's syndrome, Alzheimer's syndrome and other central nervous systems Damage; effectively prevent the oxidation of the retina and the damage of photoreceptor cells, and have a good effect in improving the function of the retina. The research results have been applied for patents. Studies have shown that feeding mice with astaxanthin-rich Haematococcus powder can significantly reduce the adhesion and infection of Helicobacter pylori to the stomach. On this basis, oral preparations have been developed abroad as anti-infective drugs. The antioxidant properties of astaxanthin can also be used to prevent atherosclerosis and related diseases. By reducing or inhibiting the oxidation of low-density lipoprotein (LDL) in the blood, the deposits on the blood vessel wall are reduced, thereby reducing atherosclerosis The occurrence of hardening, astaxanthin also has the ability to increase high-density lipoprotein (HDL) in the body, so it is used as a preparation for preventing arteriosclerosis, coronary heart disease and ischemic brain injury; in addition, astaxanthin can also be used as a common Antibiotic peroxidants and treatment of infertility, promote the development of embryos and sperm.

The largest market for astaxanthin is in the feed industry, where it can be used as a feed additive mainly for fish (salmon, sturgeon, rainbow trout, red sea bream, etc.), crustaceans such as shrimp and crab, and poultry. Astaxanthin, as a coloring agent for aquaculture animals, can make aquatic animals present bright colors and make them more ornamental; adding astaxanthin to poultry feed can increase the egg yolk content; it can also improve hen High egg production rate, promote the health of laying hens. Astaxanthin has the same function as human beings in the prevention and treatment of fish, shrimp, crab and poultry diseases. It can improve immunity, increase survival rate, and play an important role in its normal growth and healthy breeding, and increase survival rate and reproduction rate. Astaxanthin can also increase the flavor of fish, which can be directly used as a precursor compound to form the flavor of salmon food, and can also promote the conversion of fatty acids or other lipid precursors into salmon flavor compounds.

Astaxanthin, as a new type of cosmetic raw material, is widely used in creams, emulsions, lip balms, skin care products and other cosmetics due to its excellent properties. Especially in the field of advanced cosmetics, natural astaxanthin, with its unique molecular structure, can efficiently quench free radicals caused by ultraviolet rays through its antioxidant effect, prevent skin photoaging, reduce UVA and UVB damage to the skin, prevent The occurrence of skin cancer, delaying cell aging, reducing skin wrinkles, reducing melanin deposition, reducing freckles, can maintain moisture, and make the skin more elastic, tense and moisturized. Japan already has a patent for the production of cosmetics using the anti-photosensitivity effect of astaxanthin.