Home / News / Plant Extract / What You Need To Know About Curcumin?

What You Need To Know About Curcumin?

Curcumin is a chemical component extracted from the rhizomes of some plants in Zingiberaceae and Araceae. Among them, turmeric contains about 3% to 6%, which is a rare pigment with diketones in the plant kingdom, which is diketones. compound. Curcumin is an orange-yellow crystalline powder with a slightly bitter taste and is insoluble in water. It is mainly used in food production for coloring sausage products, canned food, and stewed sauce products. Medical research shows that curcumin has the effects of lowering blood fat, anti-inflammatory, choleretic, and anti-oxidation. Scientists have newly discovered that curcumin can help treat drug-resistant tuberculosis. 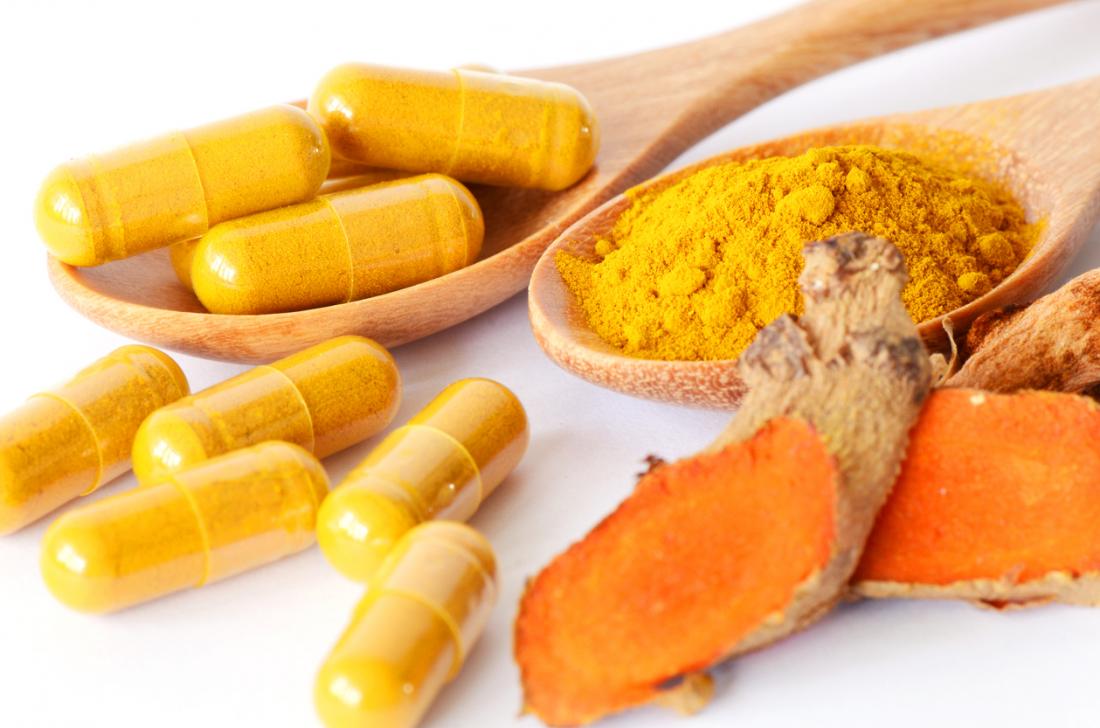 Curcumin was first isolated from Curcumalonga L. in 1870, a low molecular weight polyphenolic compound. In 1910, the chemical structure of its bis-feruloyl methane was clarified, and subsequent studies on its physiological and pharmacological effects Significant progress has been made. With the deepening of research on curcumin, it has been found that it has a wide range of pharmacological activities such as anti-inflammation, anti-oxidation, lipid-lowering, anti-virus, anti-infection, anti-coagulation, anti-hepatic fibrosis, anti-atherosclerosis, and toxicity Low, little adverse reactions. Curcumin is currently one of the most sold natural food pigments in the world, and is a food additive approved by the World Health Organization, the US Food and Drug Administration and many countries. Researchers are attracted not only to curcumin as a non-steroidal anti-inflammatory drug, but because of its chemopreventive properties, curcumin has a wide range of preventive properties against diseases. In view of the fact that modern medical research has found that the occurrence of many diseases in the human body is related to the formation of free radicals and the participation of inflammatory reactions, the antioxidant activity and anti-inflammatory effects of curcumin have attracted widespread attention from scholars at home and abroad.

Curcumin is orange-yellow crystalline powder with slightly bitter taste, insoluble in water and ether, soluble in ethanol and propylene glycol, easily soluble in glacial acetic acid and alkali solution, reddish-brown when alkaline, yellow when neutral and acidic. Determined by OT-42 method. The melting range is 179-182°C.

Curcumin has strong stability to reducing agents, strong coloring, and is not easy to fade after being colored, but is sensitive to light, heat, and iron ions, and has poor light resistance, heat resistance, and iron ion resistance.

Since there are two hydroxyl groups at both ends of the curcumin molecule, the conjugation effect of electron cloud deviation occurs under alkaline conditions, so when the pH is greater than 8, curcumin will turn from yellow to red. Modern chemistry uses this property to use it as an acid-base indicator.

What is organic curcumin powder used for?

Curcumin has been widely used in the food industry as a common natural pigment for a long time. It is mainly used for the dyeing of canned food, sausage products, and stewed sauce products. The amount of use depends on normal production needs. The product form of functional food with curcumin as the main ingredient can be general food, or some non-food form, such as capsules, pills or tablets. For general food forms, some yellow pigment foods can be considered, such as pastries, sweets, beverages, etc.

Curcumin is a food additive approved by the Codex Alimentarius Commission of the Food and Agriculture Organization of the United Nations (FAO/WHO-1995). It is one of the nine natural pigments that were first promulgated in my country's "Hygienic Standards for the Use of Food Additives" and allowed to be used in food. The newly promulgated "Standards for the Use of Food Additives" (GB2760-2011) stipulates that frozen drinks, cocoa products, chocolate and chocolate products and candies, gum-based candies, decorative candies, toppings and sweet juices, batter, coating powder and frying powder , instant rice noodle products, seasoning syrup, compound seasoning, the maximum amount of curcumin in carbonated drinks and jelly is 0.15, 0.01, 0.7, 0.5, 0.3, 0.5, 0.5, 0.1, 0.01, 0.01 g/kg, margarine And similar products, cooked nuts and seeds, grain product fillings and puffed foods can be used in moderation according to production needs.

Curcumin also has antiseptic properties. At present, curcumin is widely used in the food industry as a condiment and pigment at home and abroad. Turmeric can replace the precious spice saffron in medieval Europe, and it is also an indispensable traditional curry food in Indian life, common barbecue rolls in the Middle East, common condiments in Persian and Thai dishes, and common pigments in mustard sauce. Curcumin used for food coloring is mainly divided into four categories: water-dispersible turmeric oil, water-dispersible purified turmeric, oil-soluble purified curcumin and purified turmeric powder. my country began to study and apply curcumin in the mid-to-late 1980s, and reached its peak in the early 1990s. However, due to product quality, the degree of marketization is not high. At present, water-soluble and oil-soluble curcumin products comparable to foreign countries have been developed in China. Through compounding, curcumin in various colors has been produced, which has been widely used in pasta, beverages, fruit wine, candy, cakes, canned food, fruit juice and other products. Cooking dishes, as a compound seasoning, it is used in chicken essence compound seasoning, puffed seasoning, instant noodles and noodle puffed products, instant food seasoning, hot pot seasoning sauce, paste flavor and fragrance, seasoning pickles, beef jerky products, etc. my country is one of the main producing areas of turmeric in the world, rich in resources, and the current annual output has reached tens of thousands of tons, which already has a good market advantage.

Turmeric is a commonly used medicine, and its main bioactive components are curcuminoids and volatile oil. The former has the effects of lowering blood lipids, anticoagulation, anti-oxidation, and choleretic; while the latter mainly has anti-inflammatory, antibacterial, and cough-relieving effects. 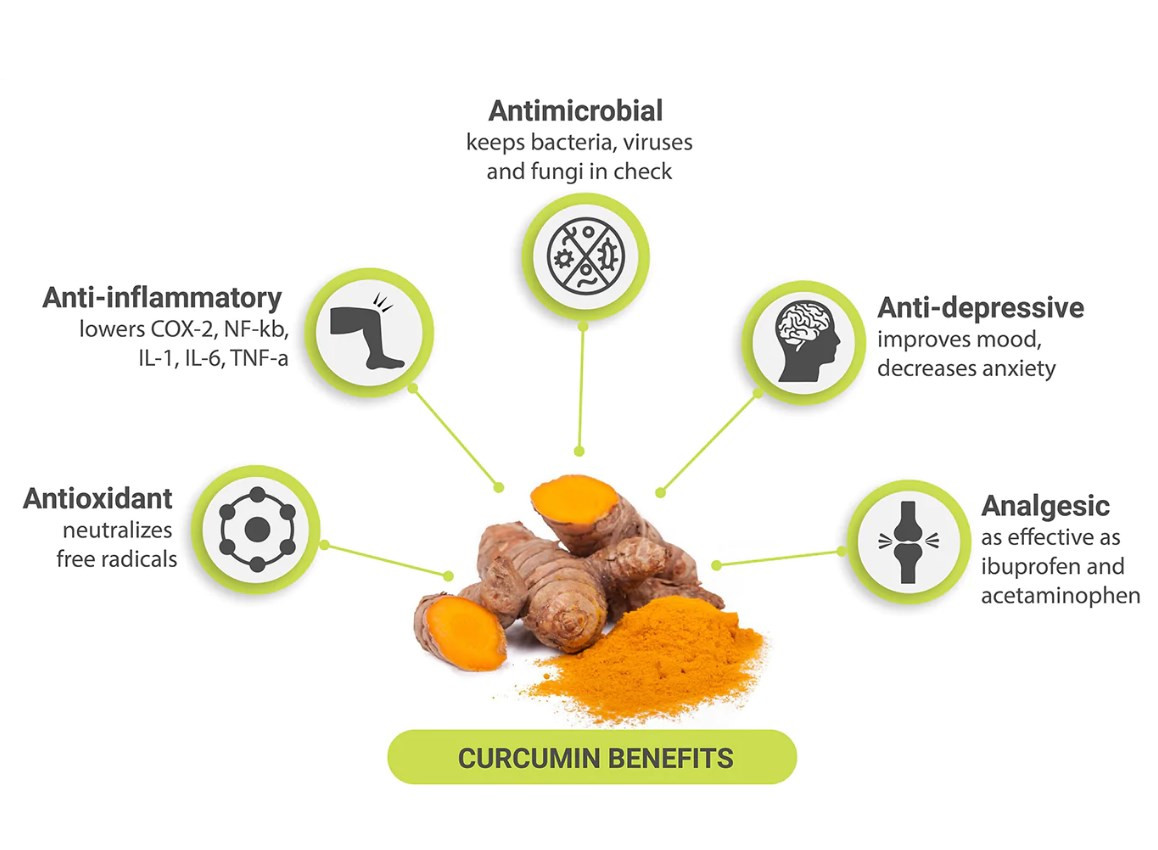 Curcumin is a plant polyphenol extracted from turmeric, and it is also the most important active ingredient for turmeric to exert its pharmacological effects. Recent studies have not only proved the traditional role of turmeric, but also revealed some new pharmacological effects, such as anti-inflammatory, anti-oxidation, scavenging oxygen free radicals, anti-human immunodeficiency virus, liver and kidney protection, anti-fibrosis, etc. It may be related to inhibiting the activation and expression of transcription factors such as nuclear factor-κB and activator protein-1, and has no obvious toxic and side effects.

Animal experiments at Duke University in the United States have shown that curcumin in curry can not only decompose amyloid in the brains of experimental mice, but also prevent the formation of this protein. The researchers pointed out that regular consumption of curry may also have a similar effect on people, thus helping to prevent Alzheimer's disease.

Many studies have proved that the accumulation of amyloid protein in the brain is one of the most important causes of Alzheimer's disease. Previous studies have shown that curcumin, the key ingredient in curry, can prevent brain nerve cell damage and improve the function of brain nerve cells.

According to US media reports, researchers at Duke University in the United States have genetically modified experimental mice so that many amyloids appear in their brains. The researchers then provided these mice with a curcumin-rich food and found that amyloid in the brains of the mice was broken down, and the same diet also prevented the development of amyloid in the brains of the mice as adults.

Inflammation is a complex process triggered by cellular infection and/or tissue damage, resulting in a series of chain reactions that eventually lead to the rapid development of certain chronic diseases. Given that inflammation plays an important role in most chronic diseases, anti-inflammatory drugs are needed for prevention. Although several different steroidal and non-steroidal anti-inflammatory drugs such as cemecoxib, aspirin, ibuprofen, phenylbutazone, etc. can be used to treat inflammatory diseases, most of them have side effects. Studies have found that the anti-inflammatory activity of curcumin is comparable to steroidal and non-steroidal drugs, such as indomethacin and phenylbutazone, and is safe in most cases.

In practical application, it is found that curcumin still has certain defects, such as low solubility, poor stability, low absorption rate, easy conversion into compounds such as glucuronic acid and sulfonic acid in the intestinal tract, fast metabolism, and short half-life. The existence of lead to its low bioavailability, which limits its application in the field of food and medicine. As found in human experiments, it can only be detected when the oral dose reaches 10~12 g. Curcumin was injected intravenously at a dose of 10 mg/kg to rats, and the maximum concentration in serum was only 0.36 μg/mL; oral administration of 1.0 g/kg curcumin After 15 min of kg curcumin, the concentration in the plasma of rats was only 0.13 μg/mL, and reached the maximum concentration of 0.22 μg/mL after 1 hour, and could not be detected in the plasma after 6 hours. After oral administration of curcumin to rats, only trace amounts were detected in the blood, liver and kidneys, 90% were present in the stomach and small intestine, and only 1% remained after 24 hours. After intraperitoneal injection of 0.1 g/kg curcumin for 1 hour, it was found that curcumin The distribution of the hormone varies greatly among organs, with the most in the intestine (117 μg/g), followed by the kidney, blood and liver, and very low in the brain (0.4 μg/g). Therefore, improving the bioavailability of curcumin will be an important direction worth studying in the future.

How to increase curcumin bioavailability?

If curcumin is combined with piperine, an inhibitor of glucuronide binding in the liver and intestines, curcumin can also be made into a chelate with metal ions, such as copper curcumin to improve its ability to scavenge active oxygen groups And pharmacological activity, and reduce the toxicity of metal ions.

The biological activity of curcumin largely depends on its chemical structure, modification of its benzene ring, methylene and carbonyl, and screening of derivatives and analogues are important ways to improve its bioavailability.

(3) Changing the dosage form of the product

At present, the main dosage forms of curcumin are solid dispersion, nanoparticle, liposome, micelle and so on. For example, polyvinylpyrrolidone (PVP) and polyethylene glycol (PEG) were used as carriers to prepare curcumin solid dispersions. Compared with ordinary tablets, the bioavailability of curcumin-PVP solid dispersions in rats was improved. up 590%.

Nano-curcumin has the advantages of long circulation time, strong permeability and anti-body metabolism in the body, but there is a problem of leakage. There are a large number of gaps between the hydrogel magnetic nano-hybrid (HGMNC), and curcumin molecules can be connected to the surface of the nanoparticles, so that the release ability is sustained and efficient. Utilizing the sensitivity of HGMNC to external magnetic field stimulation, curcumin can be carried to target sites such as cancer cells to play a role in targeted treatment of diseases. The liposome can fuse with the cell membrane, and can send curcumin into the cell, so that the drug is mainly distributed in tissues and organs such as liver, spleen, lung and bone marrow. However, as a carrier, liposomes have problems such as poor stability and easy leakage.